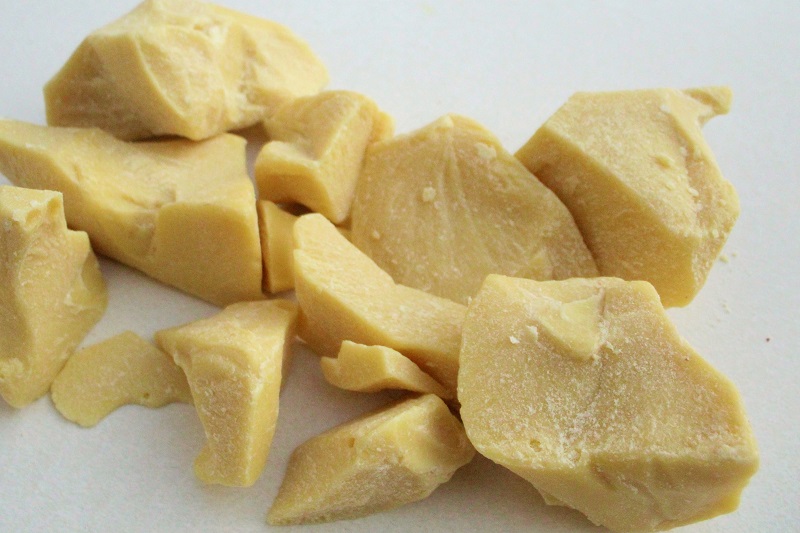 While I get this question quite often, it seems to reveal more about the dearth of knowledge surrounding vegan chocolate than about anything else. The short answer is that yes, cocoa butter is vegan friendly and dairy-free, as it’s a plant-based fat. But the reasoning behind why the fat of the cacao plant is called a ‘butter’ connects back to the fat’s two main uses: chocolate and cosmetics.

So how did this yellow-tinted fat come to be used in such a huge variety of scenarios, from white chocolate to lotions and lipsticks? It comes down to the science of how cocoa butter is produced and how it interacts with the human body.

While ‘cocoa butter’ is the more well-known term for the fat of the Theobroma cacao tree’s seeds, in chocolate making ‘cacao butter’ is also quite common, and refers to the exact same ingredient. The confusion between ‘cacao’ and ‘cocoa’ is discussed further here, but the gist is that one is a scientific name and the other is just more common parlance in English. That said, cacao butter has been a part of chocolate since the food was invented, as it makes up between 45-55% of the cacao beans, the base material for chocolate.

When cacao beans are roasted and peeled, they’re ground into a liquid called chocolate liquor, which is then further heated and pressed to extract the fat. What you’re left with is cocoa butter and a cake of pure cocoa powder. The fat then needs to be filtered for particles of cocoa solids, and many companies selling it to the cosmetics industry will superheat the fat to remove the chocolaty aroma, a process called deodorizing. But for chocolate making, this cacao butter is left smelling sweet, as cocoa butter is the main ingredient in both white and milk chocolate.

Cocoa butter is actually the reason why chocolate melts in your mouth- or in your hand- because it has a melting point of around 95°F/37°C. In fact, the reason that cocoa fat is called a ‘butter’ is actually because of this solid state at room temperature. When a fat is liquid in this neutral state, it’s commonly called an ‘oil,’ whereas a fat that’s solid is this neutral state is dubbed a ‘butter.’

For further examples, see shea butter or mango butter vs. avocado oil or olive oil, all of which are vegan-friendly fats (albeit not all edible). Tinted cocoa butter is also used to decorate bonbons and other confections.

For decades now, cocoa fat has also been used in cosmetics, most notably body creams and chap sticks, thanks to its unusual melting point & ability to keep skin hydrated. It’s a very stable and thick fat, easy to find, difficult to go bad, and full of antioxidants. It even has an SPF of around 6, which is perfect for a short walk outside (but shouldn’t be used to fully replace sunscreen).

Unfortunately cocoa butter can also clog your pores, so when in search of vegan skincare, I’d avoid anything containing it if you have acne-prone skin. But on the body, cocoa butter can work wonders. The fatty acid composition is mostly saturated fats, so it locks in moisture, especially when paired high a high-moisture oil like vitamin e or shea butter.

The popularity of cocoa butter in cosmetics has had questionable effects upon cocoa-growing regions (namely overdependence), but it has also led to an abundance of cocoa powder, making the chocolaty flavor we know & love more accessible to everyone. The cocoa solids left over from cocoa butter production are now used in vegan hot cocoa, homemade chocolate, and brownies the world over.

So there you have it. Whether you saw cocoa butter on an ingredients label in your lotion, on your chocolate bar, or in the suggested list on Amazon, now you have a much better idea of how to make good use of it!

This website uses cookies to improve your experience while you navigate through the website. Out of these, the cookies that are categorized as necessary are stored on your browser as they are essential for the working of basic functionalities of the website. We also use third-party cookies that help us analyze and understand how you use this website. These cookies will be stored in your browser only with your consent. You also have the option to opt-out of these cookies. But opting out of some of these cookies may affect your browsing experience.
Necessary Always Enabled
Necessary cookies are absolutely essential for the website to function properly. This category only includes cookies that ensures basic functionalities and security features of the website. These cookies do not store any personal information.
Non-necessary
Any cookies that may not be particularly necessary for the website to function and is used specifically to collect user personal data via analytics, ads, other embedded contents are termed as non-necessary cookies. It is mandatory to procure user consent prior to running these cookies on your website.
SAVE & ACCEPT